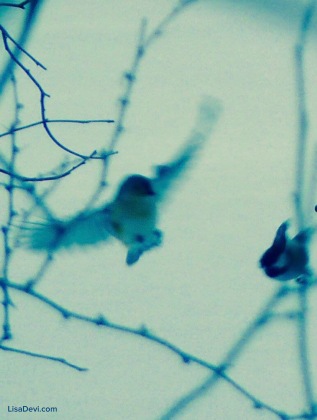 “A bird sitting on a tree is never afraid of the branch breaking, because her trust is not on the branch but on it’s own wings.”

Each of the four seasons has it’s gifts, and I think winter is one of the best times to shed light on the discipline of Svādhyāya, self-study — particularly after the holidays have come and gone, the depth of winter has set in, resolutions have pricked us to develop into a better version of ourselves, and the quiet of winter gives us the conditions to look deeply. Svādhyāya is an invitation to draw our energy inwards and inquire into our own true nature.

The term Ashtanga Yoga has become synonymous with the vigorous vinyasa yoga sequence codified by Pattabhi Jois and originating in Mysore, India. When someone says that they practice Ashtanga Yoga it oftentimes means that their primary practice is this approach, as opposed to Sivananda Yoga, Iyengar Yoga, Jivamukti Yoga, Kundalini Yoga or any of the many other approaches to yoga practice.

Traditionally, the term Ashtanga Yoga is an eight (ashta) limbed (anga) philosophy laid out in the Yoga Sutras of Patanjali which includes: Yama* (moral behaviors), Niyama** (personal disciplines), Asana (postures), Pranayama (breath control), Pratyahara (withdraw of the senses), Dharānā (concentration), Dhyāna (meditation), and Samādhi (absorption). This is the foundation of Yogic Philosophy and generally supersedes stylistic differences to the path of yoga.

Svādhyāya is included as one of the five Niyamas: personal behaviors and disciplines. Svādhyāya translates to Self-Study. Sva means Self and Adhyaya means study or education.

While the order in which the eight limbs are laid out make progressive sense, the philosophy can also be considered as a whole, a spiral, or web. Meditation can shed light on our sense of contentment. Asana can focus the mind for meditation. Breath work can teach us a lot about non-grasping, non-violence, and awareness of our energy.

All this considered, Svādhyāya is beautifully placed between Tapas (determination) and Ishvarapranidhana (surrender to God). You work, you study, you surrender. Lather, rinse, repeat. It transforms the fiery energy of Tapas into something more meaningful. To me this is where the yoga becomes the Yoga and where exercise becomes practice. This is the point at which you are asked to actively engage in and, in a sense, take responsibility for, your personal spiritual process. You are being invited to dig deeper. Svādhyāya is the wood which the fire burns, thereby creating transformation. B.K.S. Iyengar put it beautifully in Light on Yoga when he wrote; “The person practicing svādhyāya reads his own book of life, at the same time that he writes and revises it.” 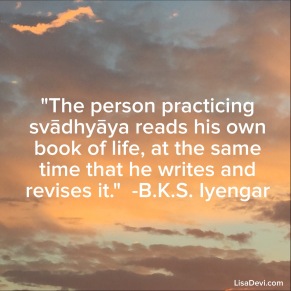 Svādhyāya represents the seeker’s search for meaning as well as the tools we have to assist us on that search. Sacred ancient texts associated with Yoga such as the Yoga Sutras of Patanjali, The Bhagavad Gita, Vedas, and Hatha Yoga Pradipika, as well as modern works such as Iyengar’s Light on Yoga, Desikachar’s The Heart of Yoga, and Autobiography of a Yogi can act as a mirror for our personal experiences. As there are many facets of the human experience, essentially anything that awakens and inspires us can be considered a source to study, whether that be Bible verses, classic literature, epic poetry or contemporary works.

Svādhyāya can mean taking a workshop on a topic that piques your interest, going on retreat with your favorite teacher in order to work more intensely, or carving out time in the morning for quiet contemplation through meditation or ritual. Svādhyāya can mean discovering new aspects of yourself by traveling to a new country or taking on new challenges that stretch us. It is an effort to gain greater insight to our own true nature or soul’s interior and should be considered self-acceptance rather than self-improvement.

With the popularity of yoga at an all time high, many yoga practitioners these days focus exclusively on yoga asana: the postures. This was my entry point as well. I came to yoga through dance but never considered either one of these practices mundane. In a way, dance was my first experience of yoga for I was able to sift all life’s experiences through my body by way of technique and artistic absorption. The same experience might be found through any art form, sport, or hobbies such as gardening or knitting. It’s all a matter of what we do with what is before us.

Through yogasana we are encouraged to witness the movements of the body, the breath, and the mind. This is often incorporated into our very first moments in class in which the teacher may guide students to close their eyes, settle into their body, and connect to their breath. Our physical body often acts as an expression of our inner emotional and mental landscapes so by working with asana and pranayama we can gain access to the deeper aspects of ourselves.

I’ll end with a story one of my yoga teachers told during an intensive in Singapore. Once upon a time while at University in Australia, he and his friends decided to throw a dandy champagne party. They rented champagne flutes and had a grand time together as champagne tends to encourage. Toward the end of the evening as merriment reached its crescendo, guests began to throw the glasses at the ground in celebration. The next morning, pained with the sugary hangover of bubbly, reality returned and the cleanup began. Seemingly helpful friends dimwittedly asked what they could do to help. The answer was quiet obvious, wasn’t it? Clean up the broken glass!

The work needed is right in front of us. The next step is often more obvious than we realize. My teacher told us this story alongside much prompting for us to really step up to our practice. We had the experience, the knowledge, and his guidance — what was stopping us? The practice of svādhyāya has the ability quiet the chatter and clear the path. It gives us practical control over our situation while encouraging us to see the examples and support of those who have come before us — what a gift.

Clean up the glass!

One thought on “Winter, a time to turn inward”